Are you making the “great escape”? You may not have yet packed your bags but you’ve decided to get as far away from America’s craziness without being touched by it.

What do I mean by the “great escape”? I’m not referring to the book or movie, but to the chaos of our society. Erosion of morals and values. Erosion of economic, government, justice, law enforcement and political systems have caught many of you by surprise and outright disbelief. Rather than viewing the chaos as a continuous unraveling over decades and generations, you may view it as everything going to hell overnight. A dumpster fire on wheels, careening down the street out of control. 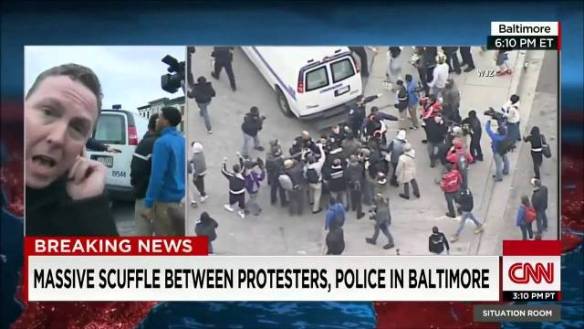 CNN reporter talks in the crush of April 2015 protests in Baltimore, Md., that erupted over death of 25-year-old African American resident Freddie Gray, who suffered fatal injuries to his neck and spine while in police custody. (Photo courtesy: CNN)

But the chaos has been a steady hatching of chickens coming home to roost. America has risen up through slavery, poverty and war; from agrarian labor to industrialization. New technologies, higher education, entrepreneurism and better wages have enabled some to fatten our bank accounts, live in decent neighborhoods and ease the work of our hands.

More of us used to help community and neighbors. But soon, our happiness became our priority and serving became an inconvenience. We moved away from personal action and invited the government to provide solutions. The anonymous (massive government and computers) began helping the anonymous (your neighbor whom the government does not know as you do). We encouraged and supported policies that liberated us from the responsibilities of our neighbor so we could pursue “getting ours” and comfortably “hold onto ours” once we got it. We didn’t want to be bothered by whoever was still “trying to get theirs.” Let government handle it.

This began our “great escape.” This “great escape” was further emboldened by an arrogance and self-assuredness that once we got ours, we no longer needed God. In our bad times we cleaved to God. Our dependence upon Him was dire and childlike. Now that we’ve made it, we say, “I got this. What can God do for me that I can’t do?” Now that things are on fire and appear out of control, people want to escape unscathed—not realizing how their inaction has contributed to the chaos.

Some people have forgotten how to be servants. Self-interest has set in. Human selfishness ultimately, when it grows, causes communities to perish because of selfishness.

Granted, and thankfully, the aforementioned does not describe many of you reading this or those I know. But like Nehemiah, let us as a nation repent, rise, respond to the need and rebuild.

And yes: there will be a cost. There is always a cost to sacrificing our comfort for someone else’s.

As Christians, our calling is to engage with the world, not seek escape from it. We’re called to be light in darkness. If you’re serving, thank you! If not: Be bold enough to leave the familiar and secure places to follow God’s voice to serve others. Die to self to become more like Christ. Invest in others. Where you invest, it certainly will give you a return. Christ is our world’s greatest hope and Good News. He is the Light of the world (John 8:12) and others need to see Him through you.

Yes, there is darkness in our world. Our world is a spiritual battleground with darkness and light contending for the same territory. Yet, as a dear sister in Christ reminded me, God is using these same conditions to be Light through His People.